It’s movie night, baby! J + I have been on the hunt for new movies worth watching for weeks now, ever since the pandemic hit and going to the movies was no longer a date night possibility. We watch at least one movie a week together, so we’ve been big on finding new gems, especially since blockbuster hits…aren’t happening. Here are 7 great movies to watch or add to your weekly watchlist! I’ve included the italicized description from Google for each, relevant ratings, and our own thoughts. 🙂 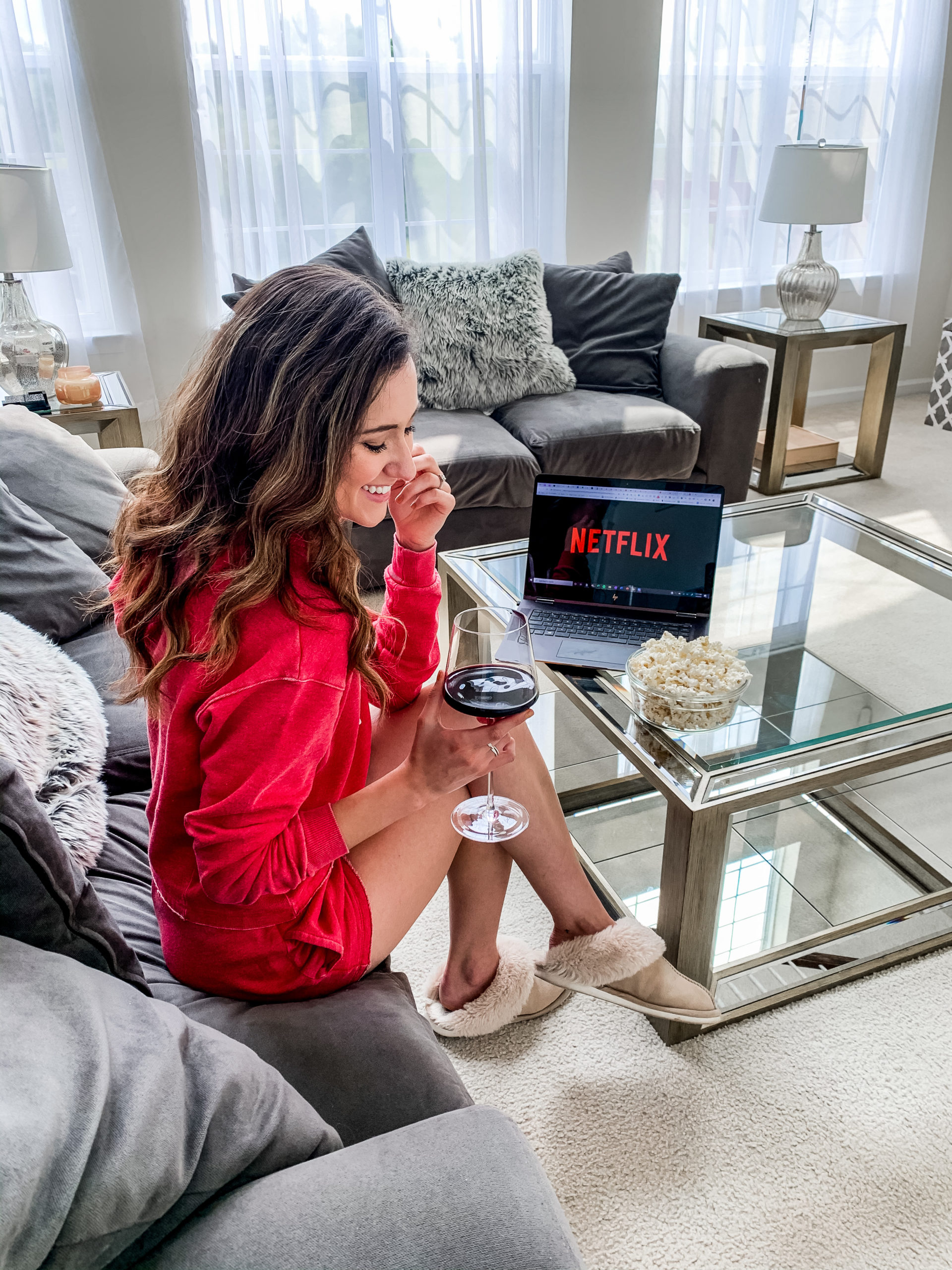 After graduating from Harvard, Bryan Stevenson heads to Alabama to defend those wrongly condemned or those not afforded proper representation. One of his first cases is that of Walter McMillian, who is sentenced to die in 1987 for the murder of an 18-year-old girl, despite evidence proving his innocence. In the years that follow, Stevenson encounters racism and legal and political maneuverings as he tirelessly fights for McMillian’s life.
This was a FABULOUS flick that we watched after seeing many recommend is to better understand systemic racism in America, and the struggles of the Black community. It stars Michael B. Jordan, whom we loveloveloved in the Creed movies, as Bryan Stevenson alongside Jamie Foxx as McMillian. The movie is based on a true story, which we didn’t know until the end credits. Also stars Brie Larson (aka Captain America and winner of Best Actress for Room). Just Mercy is just fabulous.
A hard-partying woman receives a startling wake-up call when a visit to the doctor reveals how unhealthy she is. Motivated to lose weight, she soon takes up running to help her prepare for her ultimate goal of competing in the New York City Marathon.
I knew literally not a ONE thing about this movie before watching. J picked it out, said it looked good, and we tried it on a whim one random Wednesday night. And y’all, it was a true JOY to watch. I laughed. I cried. And any movie that can take me on a legit emotional journey like that where I go from belly laughing or near-snorting my drink to crying real tears of the heart strings is a movie worth watching.
Nine-year-old Sophie catches JJ, a hardened CIA operative, spying on her family during a routine surveillance operation. In exchange for not blowing his cover, JJ begrudgingly agrees to show the precocious girl how to become a spy. What at first seems like an easy task soon turns into a battle of wits as Sophie proves you don’t need much experience to outsmart a seasoned agent.
J + I both loveloveLOVED this one!!! It stars the wrestler Dave Bautista, who you may recognize from Guardians of the Galaxy. I didn’t have high hopes going in but was so beyond pleasantly surprised. Another true gem where I belly laughed AND felt the feels. We recommended it to my parents who also gave it a watch and two thumbs up – my mom made SURE to ask if it was going to be included in this great movies to watch roundup because it was just so good. It’s got action, humor, romance, the works…but it works. A+. 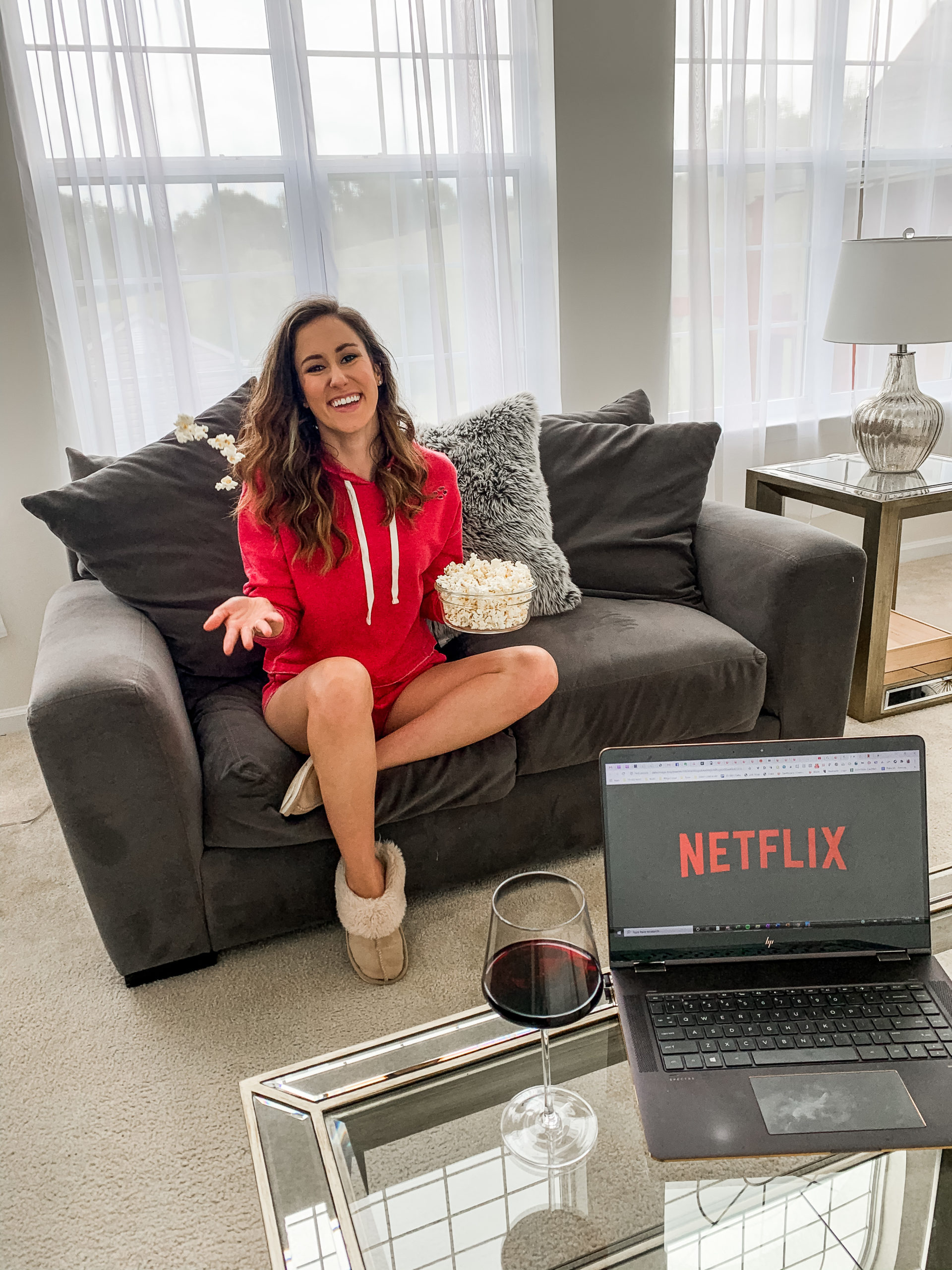 Phillip is a wealthy quadriplegic who needs a caretaker to help him with his day-to-day routine in his New York penthouse. He decides to hire Dell, a struggling parolee who’s trying to reconnect with his ex and his young son. Despite coming from two different worlds, an unlikely friendship starts to blossom as Dell and Phillip rediscover the joy of living life to the fullest.
This isn’t new by any means, but we hadn’t given it a go – even though we both loveloveloved Bryan Cranston in Breaking Bad (albeit this was a COMPLETELY different role for him obviously – ha!) and generally lovelovelove Kevin Hart’s comedy. Another winner winner chicken dinner that got another two thumbs up from my parents after they watched per our recommendation! Great laughs, great feels. A really sweet story.
Two small-town singers chase their pop star dreams at a global music competition, where scheming rivals, high stakes and onstage mishaps test their bond.
OK OK…I had basically no hope for this movie. Sure, it was ranking #1 most-watched on Netflix upon its release. But it just looked…dumb. The whole thing felt like I’d be not about it, and like it would never ever end up on a list of great movies to watch. Initially…I thought it was going to go exactly the way I anticipated, and that I’d tune out. But it grew on me so much as it went on and I ended up really liking it.
It’s also SO FULL of fun facts. Like, Will Ferrell is actually singing throughout, but Rachel McAdams is not (she’s dubbed by a famous Swedish singer!). The guy who played Beast in the new Beauty & the Beast is also in it and sings PHENOMENALLY. And Eurovision? It’s not some made up contest. Maybe I’m the only one who was totally naive to this whole world before seeing the movie??? Ha! But it was apparently the competition that kickstarted the careers of Celine Dion. Actual contestants and winners from past years make cameos in the movie. And there’s this one scene called a “song-a-long” that I knew I’d be ALL ABOUT the second it started, because it kicked off with Cher’s classic hit, Believe, which is MY JAM.
92% thumbs up on Google, and two thumbs up from us!
The story of Alexander Hamilton — politician, statesman and Founding Father.

If you haven’t been under a media rock, chances are, you heard the news: Hamilton on Broadway is now Hamilton on film, as Disney bought the rights and dropped the recording of the original 2016 production to Disney+. Bless up.

We, of course, watched it right away. And of course, it made the cut for great movies to watch basically ASAP. Drop everything. Go watch it. 😉 While I would lovelovelove to see it in person someday, that’s a big “someday” with Broadway being dark during the pandemic, and also with ticket prices being akin to some folks’ rent payments. I also HAD to see it with the original cast (fun fact: Lin Manual Miranda who wrote + starred in the show was the speaker at my college graduation!).

I had heard the hype but wasn’t sure about it since I’m big on more “traditional” Broadway-style music and didn’t know how rap would translate on stage, but y’all.

The Schuylar Sisters are unreal. Jonathan Groff as King George was perfectly cast and unparalleled. Daveed Diggs absolutely slayed, and the staging and choreography was so creative, it gave me life. Lin’s work is simply incredible.

PRO TIP: Watch with closed captioning on to help follow along, especially since some of the rap is FAST (Daveed actually broke a record for fastest on-stage rap at one point, with 19 words being rapped in 3 seconds!). The story moves pretty quickly, so you’ll want to be fully focused to not get lost or confused along the way! 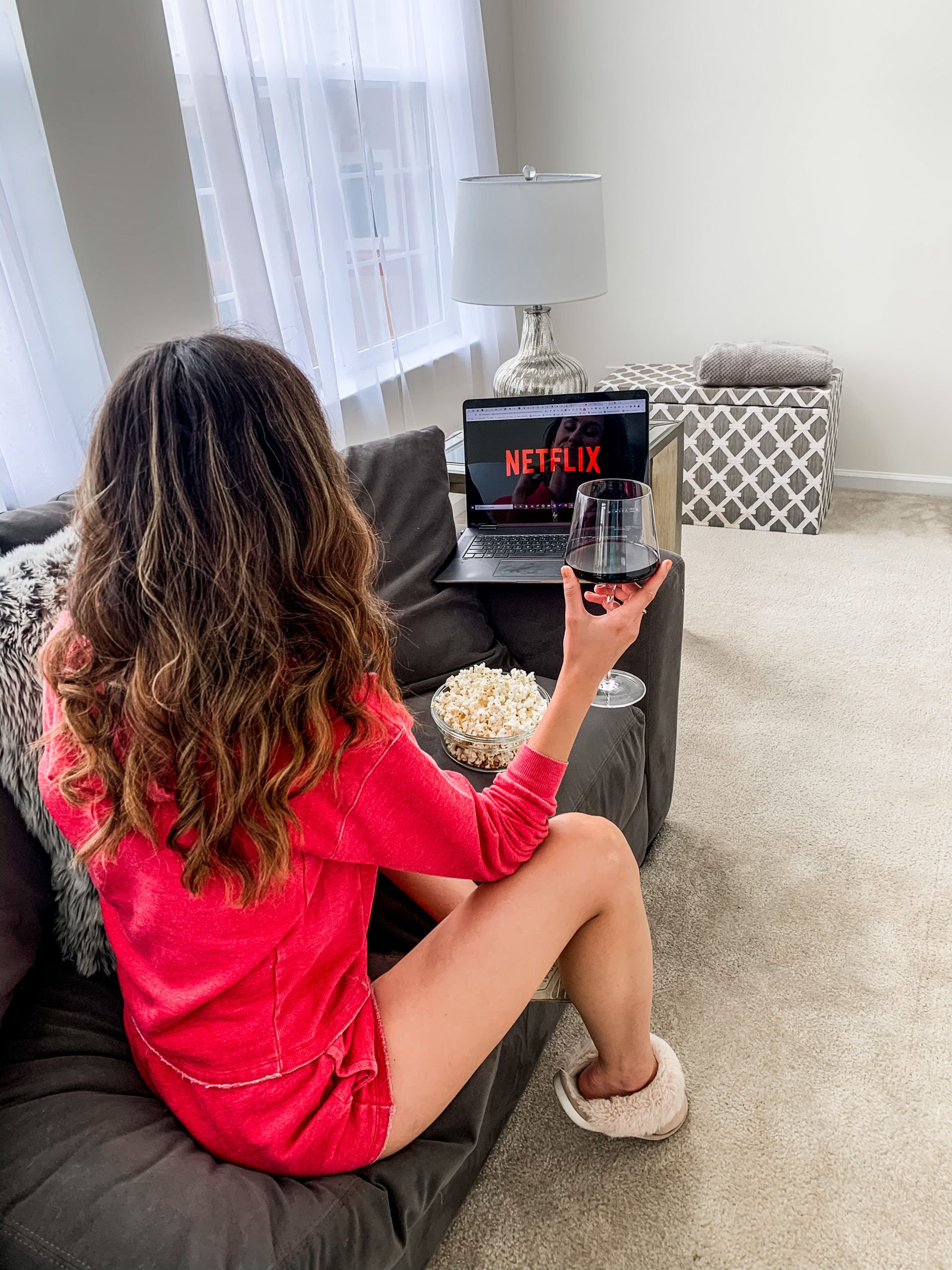 A panicked woman rushes to Mexico — with her reluctant friends in tow — to try to delete a ranting email she sent to her new boyfriend.

This wasn’t our favorite of the entire list, but I’d say worth watching if you need a new rom com! It’s new to Netflix and stars Anna Camp (from Pitch Perfect!) with some new faces. Be warned: some parts are raunchy. Like unnecessarily raunchy, in both J’s and my opinion. But otherwise, we both got legit laughs out of it and genuinely enjoyed. It BOMBED on Rotten Tomatoes but is approved by Google users. So if you want/need a lighthearted laugh from a chick flick and understand it’s not an Academy Award in the making, worth it. 😉

Any great movies to watch that you’d add to this list?

We’re always on the hunt for something good, so if you’ve seen something you’d recommend – drop it in a comment below! 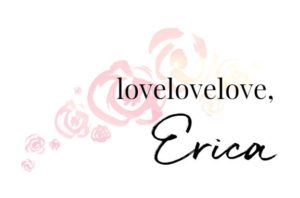 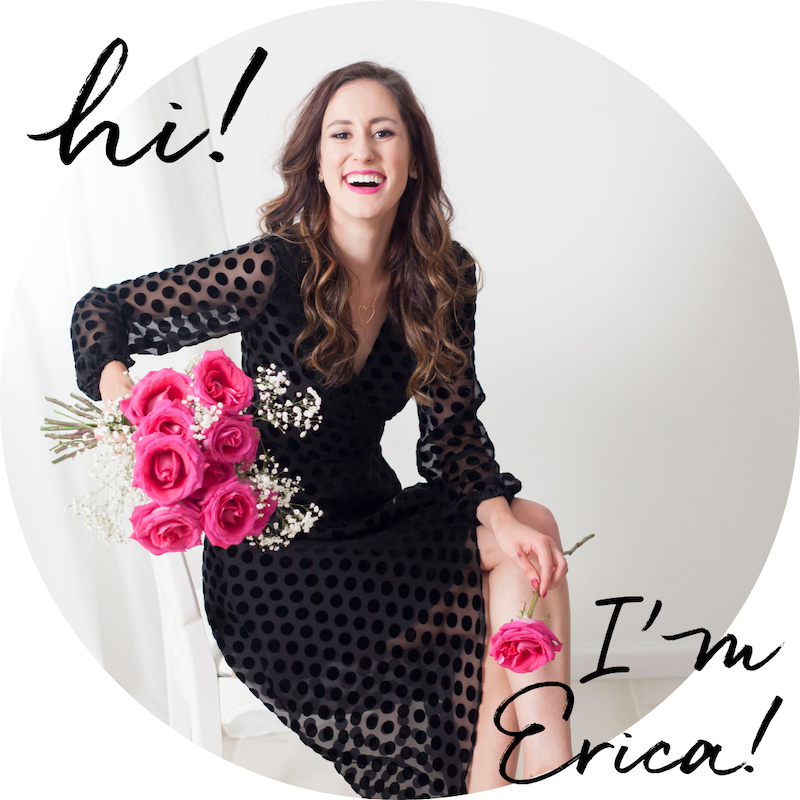 One of my FAVORITE things to blog anymore is looks for less. I mean, can ya blame me? I've always...